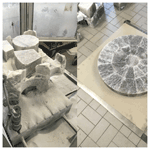 The long-term safe containment of high-level radioactive waste in a repository in rock salt is ensured if the geological barriers in conjunction with the geotechnical barriers are permanently impermeable to fluids. As such, an essential factor in underground disposal is to confirm that the interfaces between the biosphere and the lithosphere, i.e., shafts, boreholes, and galleries, created during the excavation of underground cavities can be sufficiently tightly sealed. An essential element of the sealing system required to this end is shaft closure.

All shaft closure concepts developed thus far include sealing and supporting elements in repository shafts, but differ in the arrangement of these structural elements and the materials used. The materials currently proposed and planned for the construction of the sealing elements include: clay/bentonite, asphalt/bitumen, crushed salt, and salt/sorel cement.

In addition to the materials mentioned above, a research project funded by the German Federal Ministry for Economic Affairs and Energy (Bundesministerium für Wirtschaft und Energie, BMWi) is investigating the possibility of integrating a layer of salt cut bricks several decameters to 100 m thick into the shaft closure system as a sealing element that provides the option of allowing the geological barrier to heal in the long term. Like the surrounding rock mass, the salt cut bricks are made of natural rock salt. According to this plan, the profile of the bricks is designed to minimize joint volume as far as possible by cutting them to match the geometry of the shaft. The joints between the salt cut bricks can either be filled with, for example, a supersaturated salt solution, Magnesium building materials, molten salt, crushed salt, etc., or directly brought into contact by wetting the surface of the salt cut bricks. Once the salt solution has hardened (cooling of the solution, evaporation of the mixing water), only the pore space in the crushed-salt joint sealant filled with salt solution or air, or the joint volume resulting from the mismatch between individual rock salt bricks are susceptible to a reaction. This means that the sealing element consisting of salt cut bricks develops early supporting pressure against the creeping rock salt of the rock mass compared to crushed salt, has a low initial porosity and already shows a strong sealing effect in the short term (regression of the loosened zone). One can also assume that cohesive bonding between the surrounding rock and the sealing element can already be achieved by introducing the joint filling or by wetting the contact surfaces of the salt cut bricks (no or reduced separation planes in the contact zone).

The presentation includes the results of the research work on the development, construction and commissioning of the pilot plant, as well as the first successful test results demonstrating the functionality of sealing elements made of salt cut bricks.